Half slug, half snail:a new species of gastropod discovered on the site of an operative quarry member of the Life in Quarries project, in Wallonie !

This Tuesday 08th of September 2020, Natagora, partner of the Life in Quarries project, published a press release in which the NGO announced the discovery around a quarry site in activity of a new species of gastropod still unknown in Belgium: the “helicolimace”.

The opportunity, for our editorial staff, to take an interest in these animals, often unloved and, above all, little known, which also inhabit our quarries.

But, in the end ,what is a gastropod ?

First of all, a “fun-fact”: gastropods constitute the largest animal group after insects with approximately 40,000 living species counted to date.

And if some species can boast of having an elegant Latin name, see poetic like the European weasel (Mustela vivalis) whose name means “little beautiful” or Eriovixia gryffindori, the recently discovered magic hat spider, the ethymology of gastropods is more pragmatic since it simply means “stomach-foot”. Why do complicated when…

In addition, they are the only mollusks to have successfully conquered the terrestrial environment ! Because, in fact, snails and other slugs are mollusks. So we have to start at the beginning and go a little higher in animal taxonomy (classification).

Scientifically speaking, a mollusk is an unsegmented animal, with bilateral symmetry (sometimes altered) whose body consists of a head, a visceral mass (covered in whole or in part by a mantle which secretes a calcareous shell ) and a foot belonging to the Lophotrochozoans branch (scores points in Scrabble).

And for the majority of us, that this definition could be puzzling, let’s say more simply that it is about an invertebrate animal (no vertebral column) with a soft body and that this branch is divided into 3 classes: gastropods, bivalves and cephalopods.

Thus, octopuses, clams, snails, oysters, cuttlefish, mussels or slugs are all mollusks and are studied by “malacologists” (that makes points in the crossword). The main active association in this area is the Belgian Society of Malacology (SBM), whose identification guides are the almost obligatory entry point for anyone wishing to take an interest in Belgian species.

Wonder why you stay inside
I can’t talk, can’t speak my mind
Why you wanna waste your time?
Why don’t you join me outside?

So is a slug a snail without a shell? Not that easy in the opinion of Louis Bronne, naturalist and discoverer of a new species in Belgium “Slugs are gastropods like the others … And the existence of” hybrid “species like the “helicolimace” (carrying a tiny shell on his back) should invite not to differentiate between the shelled gastropods and the others. “

Not to mention that some slugs, such as Testacellae, have a shell relic at the end of their body, where some snails (such as Vitrinidae) cannot fully retreat into their shell (fragile and incomplete). Not to mention the “slug seedlings”!

How many species are really common in Belgium?

Louis Bronne explains “In my garden, I found 21 species: they range from squirrel that nobody can miss in rainy weather to the common auriculet (Carychium tridentatum) that I only found because I was scanning carefully – with a magnifying glass! – a gap between two bricks to find another species much larger (nearly 3 mm) than I had already seen. ”

But for those of us who leave our magnifying glasses on our desks, expect to find in your garden the large orange slugs (Arion vulgaris) that we all know, Deroceras invadens (small grayish slug) and slugs of the sub- genus Arion kobeltia (probably mostly Arion hortensis, the little black slug).

Without forgetting, to a lesser extent, Cepaea (nemoralis and hortensis), wood and hedge snails, the famous little gray squirrel (Cornu aspersum) and the northern clausilie (Alinda biplicata), which is quite recognizable thanks to its large size (about 17mm long) and its very elongated and pointed shell.

In addition to these vegetable garden plunderers, you can also fall (so to speak) on the common button (all flattened, precisely), the common Clausilie (all in length like the northern Clausilie), the common velvety  (a snail whose shell is covered with hairs when he is young which earned him the nickname, in the middle, of “little hairy”), the big shiny or “blue snail”, a carnivorous species, and the very beautiful ash slug “leopard “(omnivorous, which mainly feeds on other slugs).

However, be careful, if we mainly know snails and slugs for the devastation they cause to our plantations, many species eat fungi (microscopic) or decaying matter (thus helping to create humus) and some are carnivorous (such as the “helicolimace”). 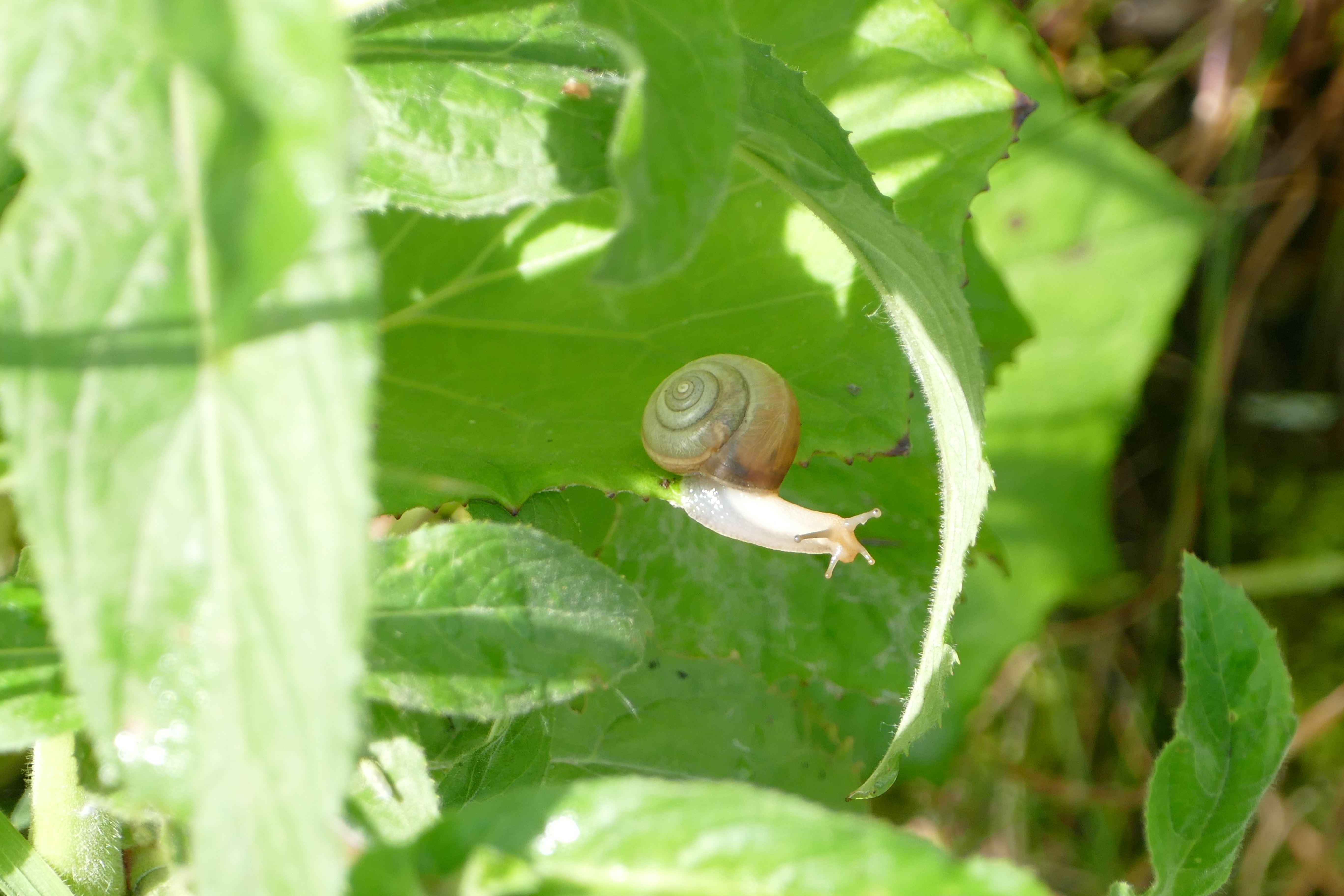 The gastropods of our quarries

While the Life in Quarries project ensures the protection and creation of habitats for many target species, gastropods are not one of them and are not on the (long) list of species to be identified during biological inventories.

However, the two species most frequently encountered during surveys are the Burgundy snail (Helix pomatia), a species well known to gourmets and indicator of limestone embankments for which a decree defines the periods of capture, and the Limnea (Lymnaea), a freshwater snail that feeds on microscopic algae and bacteria that thrive on aquatic plants.

Not especially “pioneer” species but which have their importance in the good health of our soils and which can nevertheless move over several hundred kilometers whether through human activity (for example, the little monk, described in the guides of the SBM as a rare species present only at the coast, is today an extremely widespread species in all the industrial zones where it arrived with piles of pebbles) or, again, in the digestive system of birds when our gastropods can withdraw completely in their shell, well protected from digestive juices …

The official press release of our partner

Discover below the press release from Natagora, partner of the Life in Quarries project on the discovery of a species still unknown in Belgium by a member of the project!

And also discover many other articles on the actions of the NGO and the animal and plant species that sometimes live near you – like here – in all discretion!